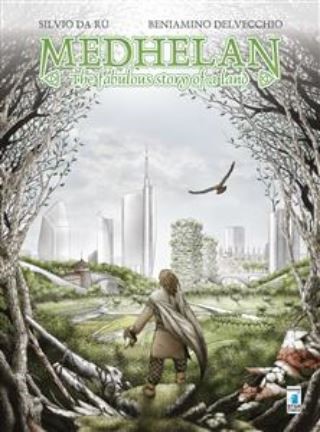 MEDHELAN – The fabulous story of a land

Milan, spring 1967. 12 counsellors have to decide the future of a great area in a very serious state of decay in the northern suburbs of Milan. The only one who is against the building plan is the Architect, who is convinced that the best strategic choice is a different project, which has its reasons rooted in the past when the area belonged to the Great Forest-a magic place made of wide grass, great rivers, lush vegetation and animals, now extinct. There begins the journey through the history of Milan and its land, from the foundation by the Celts with the name Medhelan (literally holy place) to the present, mixing real historical characters with fantasy characters from the animal and plant kingdom, witnesses of earth’s transformation over centuries detailing its long battle between Nature and Civilisation, or in other words, when the relationship of man-universe-nature broke. We meet the Celtic King Belloveso, Federico Barbarossa, Francesco Sofrza and Ludovico il Moro, in the court of whom there is also Leonardo da Vinci, Etherna, the guardian oak of millennial knowledge Asio the howl, wise chief of the Great Forest, with his loyal crow Barone Rook and Apodeus, the brown mouse that with cleverness beats the black mice troops, the plague carriers. But the Architect’s reasons cannot convince the majority of the counsellors to abandon the idea of the building plan, until something that will forever change the destiny of that area happens… Milan, spring 2015. A Photoreporter of the New York Times goes to Milan for a special report for the Expo 2015: there’s one of the former counsellors from 48 years ago and the story that he chooses to tell is the best example he knows of how Feeding the Planet. He tells about a man and his greatest fulfilment, which is something very similar to the Great Forest of 2500 years ago…