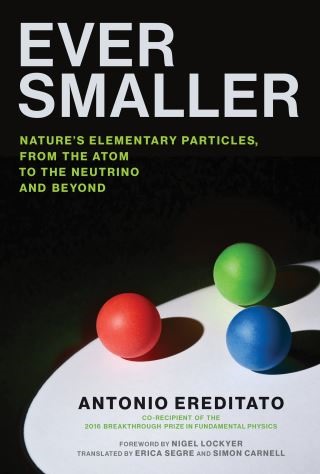 Nature's Elementary Particles, From the Atom to the Neutrino and Beyond

Ideas, theories, experiments, and unanswered questions in particle physics, explained (with anecdotes) for the general reader.

The elementary particles of matter hold the secrets of Nature together with the fundamental forces. In Ever Smaller, neutrino physicist Antonito Ereditato describes the amazing discoveries of the "particle revolution," explaining ideas, theories, experiments, and unanswered questions in particle physics in a way that is accessible (and enjoyable) for the general reader. Ereditato shows us that physics is not the exclusive territory of scientists in white lab coats exclaiming "Eureka" but that its revelations can be appreciated by any reader curious about the mysteries of the universe.

Antonio Ereditato: Antonio Ereditato is Director of the University of Bern's Laboratory for High Energy Physics. He is the former leader of OPERA, a large multinational collaborative study of neutrino physics at CERN (European Organization for Nuclear Research) and he participated in the ATLAS experiments at CERN that led to the detection of the Higgs boson (the "God particle") and in several large neutrino projects including T2K in Japan and MicroBooNE and DUNE in the United Sates. He is the author of The State of the Art of Neutrino Physics.