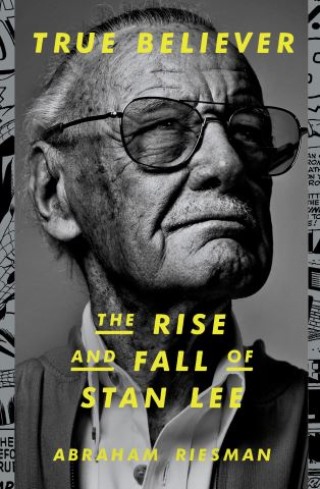 True Believer: The Rise and Fall of Stan Lee

HUGO AWARD FINALIST • EISNER AWARD NOMINEE • “A biography that reads like a thriller or a whodunit . . . scrupulously honest, deeply damning, and sometimes even heartbreaking.”—Neil Gaiman

Stan Lee was one of the most famous and beloved entertainers to emerge from the twentieth century. He served as head editor of Marvel Comics for three decades and, in that time, became known as the creator of more pieces of internationally recognizable intellectual property than nearly anyone: Spider-Man, the Avengers, the X-Men, Black Panther, the Incredible Hulk . . . the list goes on. His carnival-barker marketing prowess helped save the comic-book industry and superhero fiction. His cameos in Marvel movies have charmed billions. When he died in 2018, grief poured in from around the world, further cementing his legacy.

But what if Stan Lee wasn’t who he said he was? To craft the definitive biography of Lee, Abraham Riesman conducted more than 150 interviews and investigated thousands of pages of private documents, turning up never-before-published revelations about Lee’s life and work. True Believer tackles tough questions: Did Lee actually create the characters he gained fame for creating? Was he complicit in millions of dollars’ worth of fraud in his post-Marvel life? Which members of the cavalcade of grifters who surrounded him were most responsible for the misery of his final days?

And, above all, what drove this man to achieve so much yet always boast of more?

Abraham Riesman: Abraham Josephine Riesman is a Providence-based journalist, writing primarily for New York magazine about arts and culture. Her work has also appeared in The Wall Street Journal, The Boston Globe, The New Republic, and Vice, among other publications.