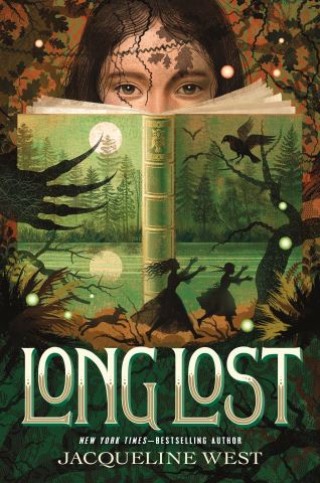 Winner of the Minnesota Book Award * A Texas Bluebonnet Book

“Perfect to be read late into the night.”—Stefan Bachmann, internationally bestselling author of The Peculiar

“A spooky sisterhood mystery that is sure to be a hit with readers.”—School Library Journal (starred review)

“Grab a flashlight and stay up late with this one.”—Kirkus Reviews

Once there were two sisters who did everything together. But only one of them disappeared.

Eleven-year-old Fiona has just read a book that doesn’t exist.

When Fiona’s family moves to a new town to be closer to her older sister’s figure skating club—and far from Fiona’s close-knit group of friends—nobody seems to notice Fiona’s unhappiness. Alone and out of place, Fiona ventures to the town’s library, a rambling mansion donated by a long-dead heiress. And there she finds a gripping mystery novel about a small town, family secrets, and a tragic disappearance.

Soon Fiona begins to notice strange similarities that blur the lines between the novel and her new town. With a little help from a few odd Lost Lake locals, Fiona uncovers the book’s strange history. Lost Lake is a town of restless spirits, and Fiona will learn that both help and danger come from unexpected places—maybe even from the sister she thinks doesn’t care about her anymore.

New York Times–bestselling and acclaimed author Jacqueline West weaves a heart-pounding, intense, and imaginative mystery that builds anticipation on every page, while centering on the strong and often tumultuous bond between sisters. Laced with suspense, Long Lost will fascinate readers of Trenton Lee Stewart’s The Secret Keepers and fans of ghost stories.

Jacqueline West is the author of the New York Times-bestselling middle grade series The Books of Elsewhere, the Schneider Family Book Award Honor Book The Collectors, and several other novels for young readers and teens. An award-winning poet and occasional actress, she lives with her family in Red Wing, Minnesota.