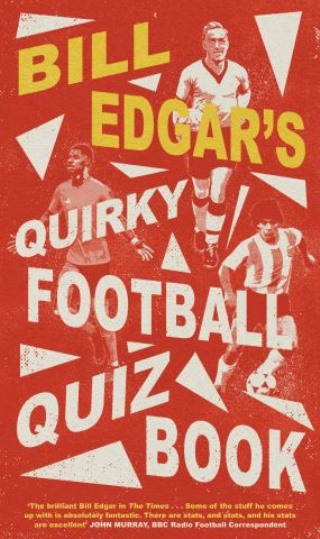 'Bill Edgar is simply the best. His quizzes draw upon one of the greatest minds in football. This is a book nobody with a love of the game can afford to miss'
MATTHEW SYED

'It must be good if it's Bill's book!!'
JAMIE CARRAGHER

'The stuff he comes up with is absolutely fantastic. There are stats, and stats, and his stats are excellent'
JOHN MURRAY, BBC Radio Football Correspondent

A MUST-BUY FOR ANY FOOTBALL FAN, THIS BUMPER QUIZ BOOK IS PACKED WITH 1,000 QUESTIONS ABOUT FOOTBALL, EVERY SINGLE ONE OF THEM EYE-OPENING OR AMUSING.

Bill Edgar has been a football writer for The Times for the past 23 years, specialising in statistics, curiosities and quizzes. He has been compiling quizzes regularly since 2008. With this quiz book he sets out to intrigue and entertain, rather than simply pose questions. Every question includes a stat or piece of trivia that is fascinating and entertaining, which readers will enjoy whether or not they succeed in answering the question correctly or not.

Bill Edgar: BILL EDGAR has been a football writer for The Times since 1997, providing match reports and general pieces. Since 2000 he has specialised in football stats and numbers. He has been compiling football quizzes regularly since 2008. He has written for Sports Illustrated and GQ and provided stats for the EFL and Betfair websites. He has provided weekly stats pieces for the Talksport breakfast show and contributed to The Times' football podcast, The Game. He is the author of Back of the Net: 100 Golden Goals and the co-author of A Football Fan's Guide to Europe. He also contributed to Taschen's The Age of Innocence: Football in the 1970s. BBC Radio 5 Live's John Murray had the following to say about Bill during commentary on a Premier League match in January 2020: 'The brilliant Bill Edgar in The Times . . . Some of the stuff he comes up with is absolutely fantastic. There are stats, and stats, and his stats are excellent.'