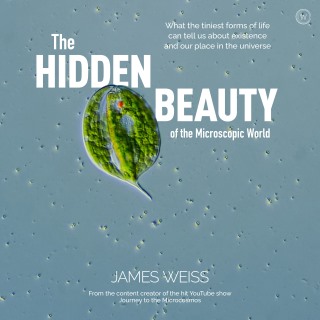 The Hidden Beauty of the Microscopic World

The videographer behind the Journey to the Microcosmos YouTube channel (386K subscribers) James Weiss presents a beginner's guide to the extremely small and utterly strange life that surrounds us.

James Weiss was feeling lost in life when he first discovered his interest in the microscopic world. With his own microscope and a little homespun ingenuity, he began to capture thousands of hours of stunning footage of the creatures that he found around him: the local pond, at the beach, in a puddle. What he found astounded him, and it became his mission to reveal the beauty of the microcosmos to everyone.

In his fun and accessible style, interspersed with otherworldly photographs, James presents this beginner's guide to the invisible life that surrounds us. From the most simple single-celled life, to complex micro-animals, James reveals the secrets of a world that we rarely consider. Navigating the births, feasts, tragedies, idiosyncracies and deaths of a cast of tiny characters, learn how these lifeforms work and what lessons they can teach us about our own existence. Mixing scientific detail with thoughtful musings that betray the fascination at the heart of his topic, James has created a way of looking at microorganisms in an empathetic and engaging style.

You'll discover fascinating absurdities: that a cell can be both its own daughter and its own mother. That immortality really does exist, and it comes in the form of a teeny, tentacled medusa. And that seeing the wonder of nature from a new perspective can literally save your life.

James Weiss: James Weiss, also known as Jam's Germs, is the videographer for the hugely popular Journey to the Microcosmos YouTube channel, which has over 500,000 subscribers.