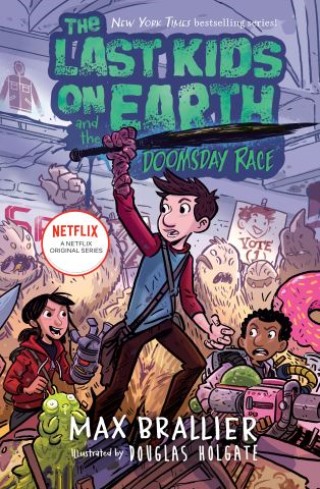 The Last Kids on Earth and the Doomsday Race

The highly-anticipated seventh book in the New York Times, Wall Street Journal, and USA Today bestselling series, with over 7 million copies in print!


With his zombie-controlling powers growing stronger, Jack Sullivan and his buddies are road-tripping toward the mysterious Tower, where they must once and for all stop Rezzoch the Ancient, Destructor of Worlds, from descending upon our dimension. But their journey is sidetracked when they are swept up by the Mallusk, an enormous centipede monster carrying the world's largest shopping mall on its back.

On board, the kids discover a thriving monster society: Mallusk City! There, they encounter old allies—as well as old foes, who are ruling over Mallusk City with an iron fist. Beating these bad guys in battle is not an option, but beating them in an election is… so Jack runs for mayor of Mallusk City! At first, proving his leadership skills just means shaking monster hands, kissing monster babies, and promising to fill the water fountains with strawberry Nesquik. But when the Mallusk falls under attack, Jack must learn how to be a true leader—before it’s too late.

Told in a mixture of text and black-and-white illustration, this is the perfect series for any kid who's ever dreamed of starring in their own comic book or video game.

Max Brallier: Max Brallier is a New York Times, USA Today, and Wall Street Journal bestselling author. His books and series include The Last Kids on Earth, Eerie Elementary, Mister Shivers, Galactic Hot Dogs, and Can YOU Survive the Zombie Apocalypse? He is a writer and producer for Netflix's Emmy-award-winning adaptation of The Last Kids on Earth. Max lives in Los Angeles with his wife and daughter. Visit him at MaxBrallier.com.

Douglas Holgate has been a freelance comic book artist and illustrator based in Melbourne, Australia, for more than ten years. He's illustrated books for publishers including HarperCollins, Penguin Random House, Hachette, and Simon & Schuster, and comics for Image, Dynamite, Abrams, and Penguin Random House.