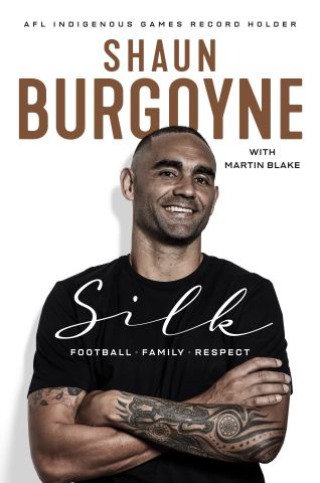 Shaun Burgoyne - inspirational footballer, leader of his people, devoted family man - is one of the most respected players in AFL history, on and off the field.

The man they call 'Silk' was the ultimate team player - versatile, highly skilled and hard at the contest, with an enviable reputation for being able to stand up in big moments.

Burgoyne is a proud Indigenous man, with a football pedigree that is a story in itself. Starting with his father's time at the Koonibba Roosters, the oldest surviving Indigenous footy club in Australia, the Burgoyne name is directly linked to Gavin Wanganeen, Eddie Betts, Graham Johncock and many other AFL stars. In his 400-plus games, Burgoyne had only two coaches. He reveals the tough love dished out by Port Adelaide coach Mark 'Choco' Williams, and the left-field techniques of legendary Hawthorn coach Alastair Clarkson. He shares how he changed from star midfielder to role player, a move that enabled him to overcome injuries and become one of the best impact players the game has seen.

Burgoyne's story isn't just about winning four premierships and becoming the Indigenous games record holder. He experienced the ugliness of racist taunts, from growing up in Port Lincoln to bearing witness to the fallout of Adam Goodes' public stance on racism. The way Burgoyne sees it, we can't change history but we must learn from it, and work towards reconciliation, to a position of mutual respect and understanding. This modest champion shares what he has learnt to show others what is possible when you seize opportunities, are willing to put in the work and surround yourself with the right people - family, friends, teammates, mentors - who will inspire, support and guide you every step of the way.

Shaun Burgoyne played a remarkable 20 seasons in the AFL. He is the Indigenous games record holder and played 407 games, becoming only the fifth man to reach the 400-game milestone. After being taken at number 12 in the 2000 national draft, he played 157 games for Port Adelaide between 2002 and 2009, winning his first premiership in 2004. Hawthorn took a punt on Burgoyne, who had knee troubles, and the trade paid off for both club and player with premierships in 2013, 2014 and 2015. In 2011, Burgoyne was an inaugural member of the AFL Players' Association Indigenous Advisory Board, taking on the role of chairman in 2016. He is a director of ACS Indigenous, a cleaning services company that aims to create employment and career opportunities for Aboriginal and Torres Strait Islander Australians.

Burgoyne lives in Melbourne and is married to Amy, his childhood sweetheart. They have four children: Ky, Percy, Leni and Nixie.