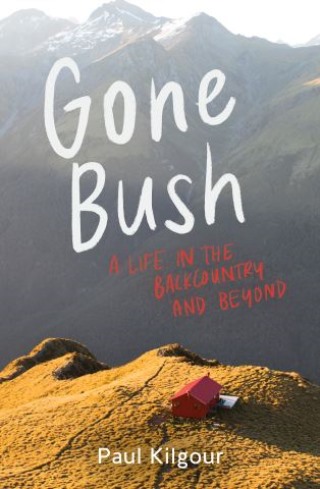 The story of a wanderer, long-distance tramper and hut-bagging legend.

Paul Kilgour was bitten by the tramping bug early. He began going on epic trips as a young boy, beyond the farm and along the coast. During these wanderings, he met old folk living simply in tiny huts out the back of farms and on clifftops, and swaggers walking in remote and beautiful locations. Even at that early age, deep inside Paul stirred the spirit of adventure and a longing to go further. And further he went.

Gone Bush is about a lifetime of walking the backcountry. It tells stories of the eccentric characters he met along the way, some of the 1200 huts he's visited, and his most unforgettable journeys, including his 'long walk home' from deepest Fiordland to the top of Golden Bay. It's also a book about the powerful effects of being in the natural environment, doing what matters and living authentically. It is a charming, meandering, transportive read - like setting off on a serene tramp in the mountains, a heavy frost underfoot and the sun on your back.

Paul Kilgour is one of the New Zealand backcountry's most famous names. He grew up in Northland during the 1950s and 1960s, when swaggies still wandered the backroads. When he shouldered his first tramping pack at age 21, he experienced a revelation, and knew he'd be doing this for the rest of his days. Kilgour has also had a lifelong obsession with baches, cribs and huts, and he is among the top hut-baggers of New Zealand. In 2007 and 2008, Kilgour walked the length of the South Island, an epic 1550-kilometre tramp from Fiordland to Golden Bay via backcountry huts and off-track routes. He lives near Takaka, Golden Bay, with his partner, Janet.