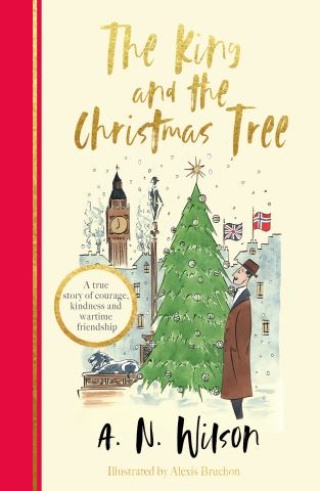 The King and the Christmas Tree

'An unlikely hero has a master storyteller to tell his tale. The King and the Christmas Tree is a poignant Christmas treat.' Lucy Worsley, historian, broadcaster and author

Every December, a huge Christmas tree arrives in Trafalgar Square. Bedecked in lights, it is a shimmering, festive beacon in the heart of London. But even more enchanting than the twinkling decorations and scented pine is the story behind the tree; a story of loyalty, friendship and resistance.

On a cold evening in 1940, German warships made their way towards Oslo. It seemed inevitable that Norway, like so many other European nations, would soon submit to the Nazi regime. But the country's indomitable King Haakon VII refused to surrender. Making his escape through his country towards the safe haven of Britain, King Haakon became an icon of hope for his people. And so, over seventy years later, the tree in Trafalgar Square remains as an enduring gift of thanks from Norway to the people of Britain.

In The King and the Christmas Tree historian A. N. Wilson artfully weaves together this tale of courage and friendship between nations. Richly illustrated and beautifully told, it is a delightful Christmas cracker for everyone, young and old alike.

A.N. Wilson: A. N. Wilson holds a prominent position in the world of literature and journalism. He is a prolific and award-winning biographer and celebrated novelist. He lives in North London.