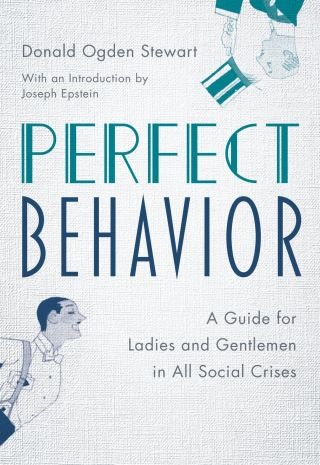 A Guide for Ladies and Gentlemen in All Social Crises

First published in 1922, this parody of etiquette and social mores makes fun of the pitfalls of courtship, engagement, and marriage, as well as such social settings as dinner parties, sporting events, and the theater. With satirical Jazz-era illustrations by Ralph Barton, known at the time for his caricatures of actors and other celebrities, the book's humor holds up remarkably well today, with such "crises" as how to deal with a screaming baby in a crowded, confined space or how to write a proper love letter to one's fiancée. With Marx Brothers–like literary slapstick, Perfect Behavior is the perfect impulse gift for anyone who enjoys a good laugh over everyday social foibles.

Donald Ogden Stewart (November 30, 1894–August 2, 1980) was an American author and screenwriter best known for his sophisticated comedies and melodramas such as The Philadelphia Story (based on the play by Philip Barry). Stewart was a member of the Algonquin Round Table and, with Ernest Hemingway's friend Bill Smith, the model for Bill Gorton in The Sun Also Rises.