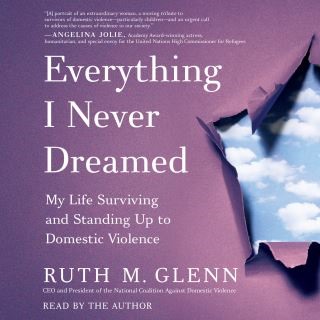 Everything I Never Dreamed

My Life Surviving and Standing Up to Domestic Violence

The raw, uplifting, and unforgettable memoir from the CEO and president of the National Coalition Against Domestic Violence chronicling her personal battle against abuse, violence, and even a murder attempt.

Ruth M. Glenn wasn’t surprised the first time her husband beat her. She was hurt and disappointed but after a childhood in a broken and violent home, she was not surprised. After all, this was just the way things were, right?

It was only after she lay bleeding in a carwash parking lot, after being shot three times by him, that Glenn resolved—if she managed to survive—to spend the rest of her life standing up to domestic violence.

Now, she brings her full story to the forefront with this survivor’s tale crossed with a rousing call to action. She reveals her difficult but ultimately rewarding journey from that parking lot to sacrificing everything to obtain her advanced degrees. With her evocative and thoughtful voice, Glenn explores the dynamics of domestic violence, why women and children are seen as lesser in our society, how to stop victim-blaming, and how to demystify domestic violence to stop it once and for all.

A memoir of resilience and courage, Everything I Never Dreamed is a necessary book that proves that abuse does not have to define a survivor’s entire life.

Ruth M. Glenn: Ruth M. Glenn is currently the CEO and president of the National Coalition Against Domestic Violence. Previously, Glenn served in the Colorado Department of Human Services for twenty-eight years, the last nine as the director of the Domestic Violence Program. She has served on many domestic violence program and funding boards, given hundreds of presentations on domestic violence victimization and survival, testified before the Colorado State Legislature and the United States Congress, and provided consultation, training, and technical assistance at the local and national levels on domestic violence victim/survivor issues. Glenn has advocated—professionally and personally—for many policies, including reauthorizing the Violence Against Women Act and legislation involving the intersection of firearms and domestic violence. She lives in Denver, Colorado. You can follow her on Twitter @RuthMGlenn.