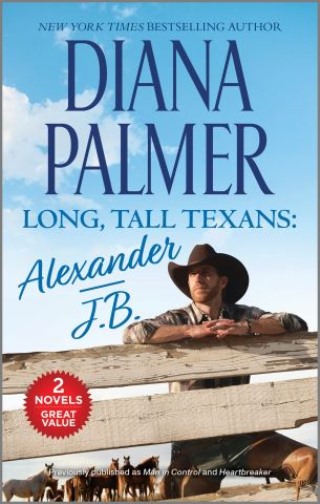 Ever since DEA agent Alexander Cobb gave Jodie Clayburn a Texas-size brush-off, they’ve been sworn enemies. But eight years later, he can’t believe Jodie has turned into such a beauty. Or that he’d have to beg her to help him crack a drug-smuggling case. Soon the two are drawn closer together, and when danger follows them home, Cobb will risk anything to protect the woman he can’t resist.

Rule number one: never settle down. J. B. Hammock treated women well, but with a no-strings detachment they gladly accepted. Until sweet Tellie Maddox. And when Tellie lost her memory, he couldn’t be so heartless as to push her aside, so he played his role…until friendship turned into something deeper than a heartbreaker like J.B. had ever intended!

Previously published as Man in Control and Heartbreaker

Diana Palmer: The prolific author of more than one hundred books, Diana Palmer got her start as a newspaper reporter. A New York Times bestselling author and voted one of the top ten romance writers in America, she has a gift for telling the most sensual tales with charm and humor. Diana lives with her family in Cornelia, Georgia.