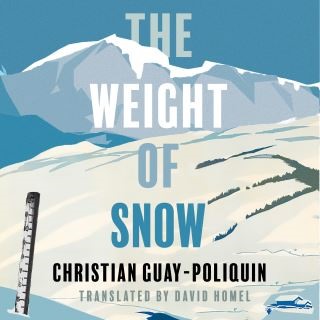 Gripping story in a post-apocalyptic context, set in rural Quebec, with tons and tons of accumulating snow. Main character is immobilized by a serious injury, giving the story a locked-room feel. Literary tone despite being plot-driven. Can be considered a sequel to Guay-Poliquin’s 2016 Running on Fumes (Talonbooks, 2016).

Christian Guay-Poliquin: Christian Guay-Poliquin was born in Saint-Armand in 1982. He is now developing a thesis project on the hunting narrative and also works in renovation. The pencil on his ear serves to mark his measures as much as it does to record his ideas. Running on Fumes is his first novel, followed in 2019 by The Weight of the Snow, both published by Talonbooks.