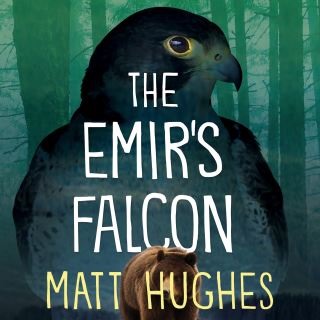 Bernie Cholach's dad wants him to take over the family's rural Alberta feedlot, but Bernie has other ideas: he wants to be a biologist, an interest sparked by his experiences as a volunteer bird handler at a Canadian Wildlife Service facility that breeds and rears peregrine falcons for release into the wild.

Sheik Nasur bin Mukhta, son of a Persian Gulf emir, studying petroleum engineering at the University of Alberta, dutifully accepts his life's course, laid out for him by his traditionalist culture.

Rosie Leboucan, daughter of a Métis trapper, running her injured dad's trap line in the Swan Hills, is focused on keeping a roof over their heads and food on the table.

Then the Government of Canada decides to give the emir one of the peregrines as a diplomatic gift. It's more than Bernie can stand. Impulsively, he takes the bird he has been tending-he's named it Skyrider-and flees to a remote cabin in the Swan Hills wilderness.

The RCMP mount a search. Nasur, sent by his father to collect the bird, insists on being on the scene-which turns out to be both Rosie's trapping territory and the territory of a hungry and dangerous mama grizzly bear with cubs.

The paths of the young people and the bear converge-and their coming together will send each in a new direction.

Matt Hughes: (Matthew) Hughes writes fantasy, space opera, and crime fiction. He has sold twenty-four novels to publishers large and small in the UK, US, and Canada, as well as nearly 100 works of short fiction to professional markets.

His latest novels are:  A God in Chains (Dying Earth fantasy) from Edge Publishing and What the Wind Brings (magical realism/historical novel) from Pulp Literature Press.