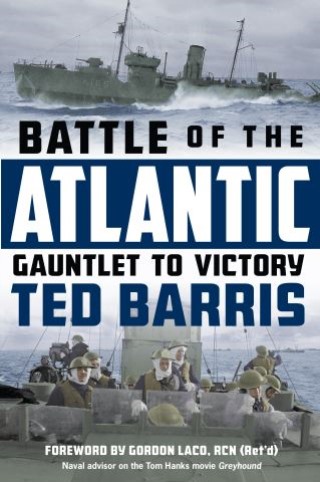 Battle of the Atlantic

The Battle of the Atlantic, Canada’s longest continuous military engagement of the Second World War, lasted 2,074 days, claiming the lives of more than 4,000 men and women in the Royal Canadian Navy, the Royal Canadian Air Force and the Canadian merchant navy

The years 2019 to 2025 mark the eightieth anniversary of the longest battle of the Second World War, the Battle of the Atlantic. It also proved to be the war’s most critical and dramatic battle of attrition. For five and a half years, German surface warships and submarines attempted to destroy Allied trans-Atlantic convoys, most of which were escorted by Royal Canadian destroyers and corvettes, as well as aircraft of the Royal Canadian Air Force. Throwing deadly U-boat “wolf packs” in the paths of the convoys, the German Kriegsmarine almost succeeded in cutting off this vital lifeline to a beleaguered Great Britain.

In 1939, the Royal Canadian Navy went to war with exactly thirteen warships and about 3,500 regular servicemen and reservists. During the desperate days and nights of the Battle of the Atlantic, the RCN grew to 400 fighting ships and over 100,000 men and women in uniform. By V-E Day in 1945, it had become the fourth largest navy in the world.

The story of Canada’s naval awakening from the dark, bloody winters of 1939–1942, to be “ready, aye, ready” to challenge the U-boats and drive them to defeat, is a Canadian wartime saga for the ages. While Canadians think of the Great War battle of Vimy Ridge as the country’s coming of age, it was the Battle of the Atlantic that proved Canada’s gauntlet to victory and a nation-building milestone.

TED BARRIS has published nineteen books of non-fiction, half of them wartime histories. The Great Escape: A Canadian Story won the 2014 Libris Award for Non-Fiction Book of the Year. Dam Busters: Canadian Airmen in the Secret Raid against Nazi Germany received the 2019 NORAD Trophy from the RCAF Association. And Rush to Danger: Medics in the Line of Fire was longlisted for the 2020 Charles Taylor Prize for non-fiction.