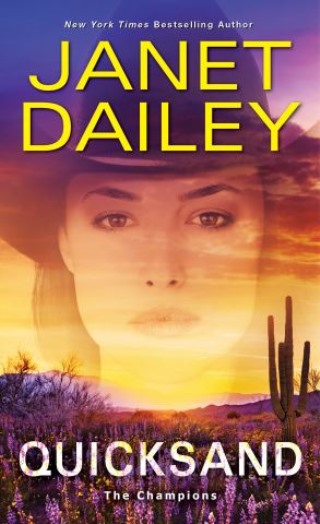 The rugged, exciting new story from the New York Times bestselling author tells the of an Arizona family ranch in trouble, as the Champion sisters fight to keep their legacy bull-rearing operation strong, going head-to-head —and heart to heart—with some of the toughest men on the rodeo circuit.

Tess Champion knows better than to trust Brock Tolman, the rancher who once swindled her late father in a land deal. But with the Alamo Canyon Ranch in foreclosure, Tess is forced to accept Brock’s offer of a partnership. Brock claims he only wants to breed the Champion bloodline into his own herd. In exchange, he offers Tess one of his own young bulls. Soon enough, Quicksand is the rising star of the rodeo circuit, which only proves Tess is better at picking bulls than she is men. Because she’s way too tempted to surrender to her attraction to Brock, despite her certainty he’s only out to steal her family ranch . . .

It’s not until the tycoon’s private plane crashes in the wilderness, stranding him with Tess, that the truth of their relationship will come out. The Champion family’s future is on the line, but it’s Tess’s heart that will take the hit if she’s fallen for the wrong man . . .

Janet Dailey: JANET DAILEY’s first book was published in 1976. Since then she has written more than 100 novels and become one of the top-selling female authors in the world, with 325 million copies of her books sold in nineteen languages in ninety-eight countries. She is known for her strong, decisive characters, her extraordinary ability to recreate a time and a place, and her unerring courage to confront important, controversial issues in her stories. To learn more about Janet Dailey and her novels, please visit www.JanetDailey.com or find her on Facebook at Facebook.com/JanetDaileyAuthor.