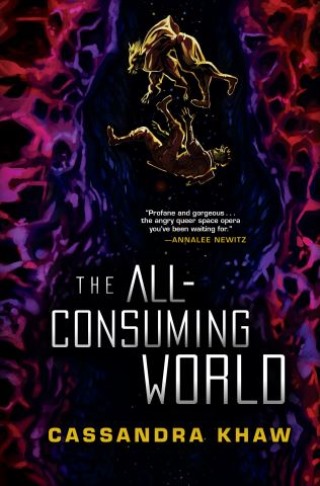 Finalist for the 2022 Locus Award for First Novel

Maya has died and been resurrected into countless cyborg bodies through the years of a long, dangerous career with the infamous Dirty Dozen, the most storied crew of criminals in the galaxy, at least before their untimely and gruesome demise. Decades later, she and her diverse team of broken, diminished outlaws must get back together to solve the mystery of their last, disastrous mission and to rescue a missing and much-changed comrade . . . but they’re not the only ones in pursuit of the secret at the heart of the planet Dimmuborgir.

The highly evolved AI of the galaxy have their own agenda and will do whatever it takes to keep humanity from ever regaining control. As Maya and her comrades spiral closer to uncovering the AIs’ vast conspiracy, this band of violent women—half-clone and half-machine—must battle their own traumas and a universe of sapient ageships who want them dead, in order to settle their affairs once and for all.

Welcome to The All-Consuming World, the debut novel of acclaimed writer Cassandra Khaw. With this explosive and introspective exploration of humans and machines, life and death, Khaw takes their rightful place next to such science fiction luminaries as Ann Leckie, Ursula Le Guin, and Kameron Hurley.

Cassandra Khaw:
Cassandra Khaw is an award-winning game writer whose fiction has been nominated for the Locus and British Fantasy Awards. Their short stories can be found in Fantasy & Science Fiction, Tor.com, Lightspeed, Uncanny Magazine, and The Year’s Best Science Fiction and Fantasy.