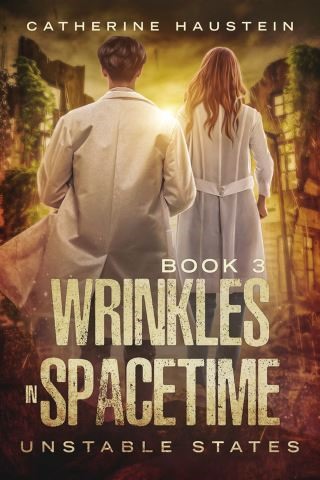 Lonely food developer Stella would like nothing better than to finally have a lab partner to help her create new synthetic products and share her passion for science. But her nation of Cochtonia has gone off the deep end. Fertility rates are dropping, and the autocratic male rulers have decided to turn to alchemy to produce offspring.

Sir Isaac Newton has been resurrected from the dead to take a lead role in the impossible task, ordered by the autocracy. He is to work as a team to create a homunculus—a tiny person, made outside of a womb. Women won’t be needed at all!

Being celibate in his previous life, Newton has never indulged in romance, but procreation without females sounds crazy even to him. When Stella offers to help him fake the results to save his neck, he’s more than willing.

But is Newton the real thing or a genetically modified fake? As the pair collaborates, Stella becomes more and more uncertain. In proceeding with the deception, they find that chemistry isn’t limited to the laboratory. In a world where love and romance are punishable by law, mutual attraction could mean execution for them both.

A childhood spent in the Midwest and Washington D.C. left Catherine Haustein with a fascination for political intrigue. She even ran for office once. She lost but came away with a treasure-trove of observations and an appreciation for people who keep their hand on the wheel of this experiment known as democracy.

A clandestine alchemist, she’s a professor emerita of chemistry and currently a freelance chemist and author. Other than these useful skills, she has a knack for spotting four-leafed clovers. She’s also a fan of lost causes, including Medusa, who she views as completely misunderstood.