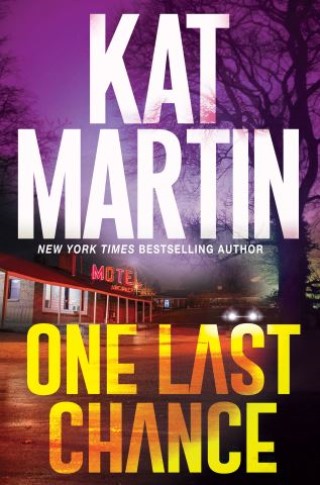 New York Times bestselling author Kat Martin mixes high-octane adventure with sizzling romance for an explosive thriller featuring an ex Green Beret, a dangerous cult and a female private investigator who will let nothing stop her from rescuing her missing sister.

Former Green Beret Edge Logan has made a new life for himself at Nighthawk Security in Denver, using his finely honed skills to neutralize threats of all kinds. When he overhears friend and fellow agent Skye Delaney discussing a new case involving her missing sister and a mysterious cult, he offers himself as backup. With her own military background, Skye is gutsy and more than capable, but a cult like Children of the Sun is too risky for anyone to investigate alone.

Skye is grateful for Edge’s experience, even though she is aware of the attraction simmering between them. Her battle scars make her reluctant to get involved with anyone, much less a coworker—even a warrior like Edge. But infiltrating the cult’s compound is more complicated than expected—and something much more sinister than worship is clearly going on behind its walls. As the pair works against the clock to unearth high-stakes secrets, the personal barriers between them begin to crumble. Together, can they unmask the face of evil before their time runs out?

Kat Martin: Kat Martin is the New York Times bestselling author of more than sixty books across multiple genres. Sixteen million copies are in print and she has been published in twenty-one foreign countries, including Japan, France, Argentina, Greece, China, and Spain. Her books have been nominated for the prestigious RITA award and won both the Lifetime Achievement and Reviewer’s Choice Awards from RT Book Reviews. A resident of Missoula, Montana, Kat is a graduate of the University of California at Santa Barbara, where she majored in Anthropology and also studied History. She and her author husband, L.J. Martin, spend their winters in Ventura, California. She is currently writing her next Romantic Suspense. Visit Kat at www.katmartin.com. Or join her Facebook page: (www.facebook.com/pages/Kat-Martin/322579975013?ref=hl)