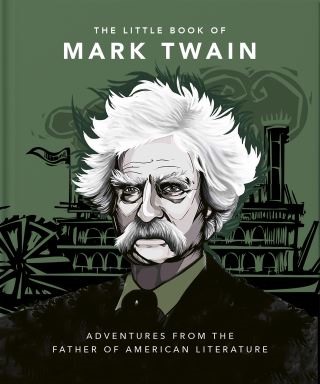 The Little Book of Mark Twain

Wit and wisdom from the great American writer

Samuel Langhorne Clemens, better known by his pen name of Mark Twain, is one of the most famous writers in American (and world) literature. Twain had a fascinating life that began in hardship in 1835 (only three of his seven siblings survived childhood) and ended shortly before the First World War. Best known for his writing, Twain was also a gifted raconteur, entrepreneur, publisher, freemason, and lecturer across a very busy life that saw him patent inventions, go bankrupt and receive a PhD from Oxford University, all the while putting out an enormous volume of superbly written literary work.

Twain also recorded some of the most biting commentary and criticism of politics and culture and is famous for his brilliant words, aphorisms, one-liners and sayings. He was never a man stuck for words, and he lived through one of the most amazing eras of politics, social and scientific change and evolution. Many of his words are as relevant today as they were 100 years ago and plenty of his classic phrases grace the pages of The Little Book of Mark Twain, alongside numerous extracts from his writings, as well as comment and criticism from his contemporaries, fans and followers. It adds up to a superb overview of the man, his character, his writing and his incredible talent.

SAMPLE FACT:
Twain was very close friends with Nikola Tesla and they worked together in Tesla's laboratory.