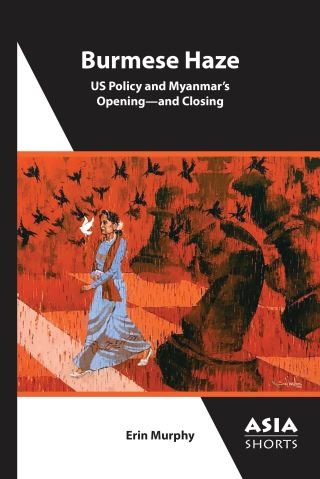 A play on George Orwell’s famous novel, Burmese Days, Burmese Haze provides a unique—and personal—perspective on the historical events and foreign ties that shaped Myanmar and its relationship with the United States. Former intelligence analyst Erin Murphy tells the story of a remarkable political transition and subsequent collapse, taking the story beyond the headlines to explain why Myanmar and US policy toward it is where it is today. The book weaves in historical details, analysis, and memories drawn from interviews with senior US officials and tycoons, monks, activists, and antagonists.

Erin Murphy has worked on Asia issues since 2001. She has spent her career in several public and private sector roles, including as an analyst on Asian political, foreign policy, and leadership issues at the Central Intelligence Agency, a director for Indo-Pacific with a development finance agency, leading her boutique advisory firm focused on Myanmar, and as an English teacher with the Japan Exchange and Teaching (JET) Program in Saga ken, Japan.