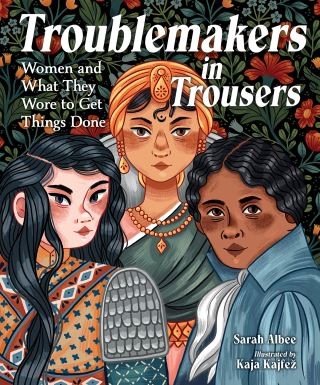 Women and What They Wore to Get Things Done

Meet twenty-one women throughout history who broke fashion and norms to do something groundbreaking in this unique middle-grade collection that celebrates trailblazers and troublemakers.

Girls and women have historically been denied access to work, been blocked from the arts, refused the opportunity to lead and fight, and much more, simply because of their gender. From Hatshepsut to Joan of Arc to Frida Kahlo, Troublemakers in Trousers highlights twenty-one women who, for different reasons, wore men’s clothing, pretended to be men, and broke the rules in order to do something they wanted—or needed—to do.

The perfect modern-day introduction to women throughout history who broke boundaries and pushed the limits set by society.

Sarah Albee: Sarah Albee is the New York Times bestselling author of more than 100 books for kids, including Accidental Archaeologists: True Stories of Unexpected Discoveries. Prior to being a full-time writer, Sarah worked at Children’s Television Workshop (producers of Sesame Street) for nine years. She played basketball in college, and then a year of semi-professional women’s basketball in Cairo, Egypt. She lives in Connecticut.


Kaja Kajfež developed her love of drawing as a child, and she earned a degree in multimedia, design, and application at University North in Croatia. She focuses on illustration, lettering, and surface pattern design. She loves exploring different historical periods, looking through old picture books, and spending time with her dog. www.izptica.com