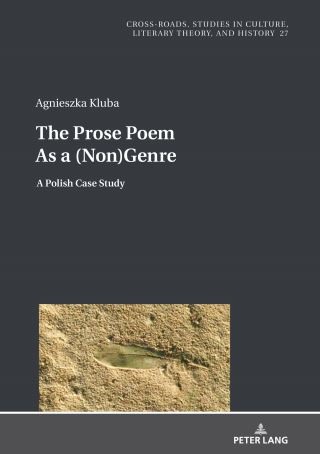 The Prose Poem As a (Non)Genre

Is the prose poem revolutionary and subversive, or marginal and lyrical? What makes a piece of prose a prose poem? Is its identity vague or precisely defined? Can every poem written in prose be considered a prose poem, a form influenced by the brilliant invention of French literature and by authors such as Baudelaire or Rimbaud? Agnieszka Kluba discusses the prose poem by providing a comprehensive summary of the existing approaches to it, but also by proposing an original conception of this form of writing. Kluba does not limit herself to considerations within literary genre theory and remains close to the poetic texts she considers. Following the intricate line of the prose poem, in Polish and European literature, she carefully assigns to prose poetry a place in Modern literary history.

Agnieszka Kluba is a professor at the Department of Historical Poetics, Institute of Literary Research, Polish Academy of Sciences. She has been a Fulbright scholar at the University of Massachusetts. Her research interests include 20th & 21st-century poetry, the theory and philosophy of literature, the "crisis of the humanities" phenomenon and memetics. Her books on Modern poetry combine a theoretical perspective with a reflection on individual poets.