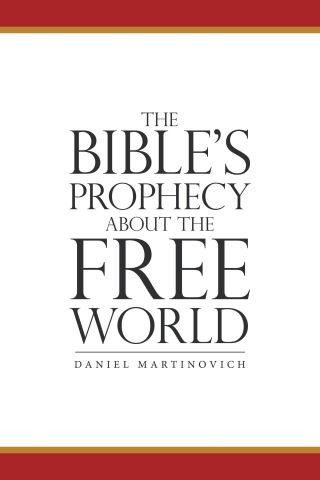 The Bible’s Prophecy About the Free World

There are over a hundred chapters of Bible prophecy about a growing free world before the book of Daniel ever uttered a word of end time prophecy. A world in which kings and emperors, dictators and warlords, are being brought to nothing. A world in which there is no more legal slavery and the earthly promises of God made to a hundred generations of saints, unfulfilled in their time, could finally begin to come to pass. This simply could not occur in the ancient despotic world where the poor masses had little to no control of their temporal or even their eternal destinies. The prophecies you will read about in this book promised an era of conditional freedom and prosperity for many nations. They promise God’s people who live in these nations will be free from the fear of oppression, and that they will be able to raise their children as they see fit. They promise the nations and peoples most influenced by the Bible and its principles will be the dominant nations in the world, just as they have been for the last 500 years. None of this occurred when the Messiah came, or with the end of the first covenant age and the horrible destruction of Jerusalem in 70 AD. In fact, it got even worse for true believers after that. It certainly did not occur when European empires and kingdoms began to claim Christianity. This all began to occur in a specific year prophesied in Daniel and Revelation, and for a specific reason. The journey you take through “The Bible’s Prophecies about the Free World” is going to change your life and rock the world around you. Nothing will ever be the same. “No eye has seen, no ear has heard, no heart has imagined, what God has prepared for those who love Him,” (1 Corinthians 2:9).

Daniel Martinovich: Daniel Martinovich was ordained by Cornerstone Christian Center in Thousand Oaks, CA 35 years ago. The focus of his teaching has been on the harder to understand subjects of the Bible that people generally want to understand but the materials are just not available. His teaching website www.wordservice.org has an average of close to 30,000 hits per month with articles that have appeared on the first page, and in some cases the first article of Internet searches by subject, some of them for a decade. The book, The Bible’s Prophecies Of The Free World encapsulate much of that work in what seems to be the very thing the Christian world is craving in this day and hour, good news about the future of a growing free world.