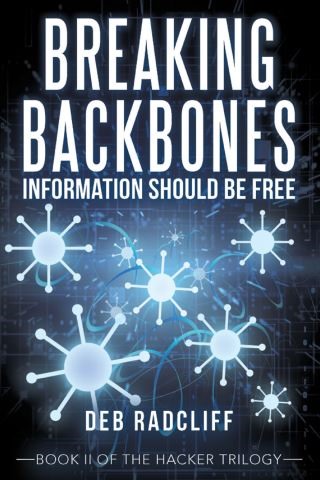 Breaking Backbones: Information Should Be Free

Book Ii of the Hacker Trilogy

Cy is still healing from injuries that almost killed her during Operation Backbone when she is called back for a very personal reason. Her son Michael is in the clutches of Damian Strandeski, former chairman of the GlobeCom board and kingpin behind all criminal syndicates operating on the dark web.

Cy quickly deduces that her son is collateral damage in Damian’s grab for the lead developer behind a new artificial intelligence named Telos, which is more powerful than GlobeCom was. As she heads to Europe on a rescue mission, Cy’s eldest son Adam enlists their clan’s rogue copy of Telos to aggressively search for Damian. Then the AI seems to take matters into its own hands…

As they execute their plan to save Michael and catch Damian, Cy and her team face unforeseen retaliation that endangers them all. Will they finally defeat Damian, or will he once again take control of the world through technology?

Deb Radcliff is the first investigative journalist to make cybercrime a beat. Since 1996, she has been embedded in the hacker and law enforcement communities, and she has won two Neal Awards for investigative reporting. She feels one of her crowning career moments was addressing engineering students and faculty at West Point Military Academy in 2001.