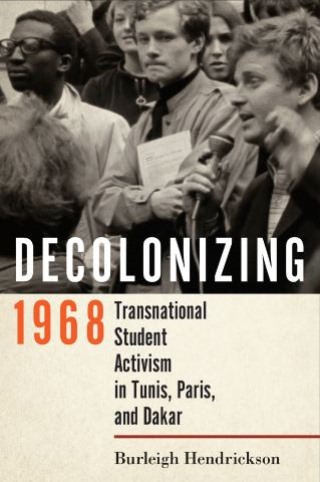 Decolonizing 1968 explores how activists in 1968 transformed university campuses across Europe and North Africa into sites of contestation where students, administrators, and state officials collided over definitions of modernity and nationhood after empire. Burleigh Hendrickson details protesters' versions of events to counterbalance more visible narratives that emerged from state-controlled media centers and ultimately describes how the very education systems put in place to serve the French state during the colonial period ended up functioning as the crucible of postcolonial revolt. Hendrickson not only unearths complex connections among activists and their transnational networks across Tunis, Paris, and Dakar but also weaves together their overlapping stories and participation in France's May '68.

Using global protest to demonstrate the enduring links between France and its former colonies, Decolonizing 1968 traces the historical relationships between colonialism and 1968 activism, examining transnational networks that emerged and new human and immigrants' rights initiatives that directly followed. As a result, Hendrickson reveals that 1968 is not merely a flashpoint in the history of left-wing protest but a key turning point in the history of decolonization.

Thanks to generous funding from Penn State and its participation in TOME (Toward an Open Monograph Ecosystem), the ebook editions of this book are available as Open Access volumes from Cornell Open (cornellopen.org) and other repositories.